During last week’s Palm Beach Town Council meeting, a record of decision made by the U.S. Army Corps of Engineers about coastal studies project Reach 8 will likely be issued later this year, according to Coastal Coordinator, Rob Weber. Weber says, “They need to do more coordination with the advisory agencies. There’s still a lot of work related to mitigation and impacts.”

The record of decision is issued by the Corps, and is a summary of its findings. The Town of Palm Beach expected to receive the decision in the Fall of 2016. The latest update has put the decision a full year behind the date of expectancy; residents will have a wait months before learning the fate of the most southern part of their Town.

The Corps published and finalized their evaluation of proposals submitted by the Town and Palm Beach County to sand the shore and water south of the Lake Worth Pier, scrutinizing the proposed projects’ possible affect on marine life and animal habitats. In 2009 environmentalists blocked the Town’s plan to nourish the Reach 8 project, since then the town provided shore protection on a periodic basis. The evaluation was completed last summer, the next step in the process, the Corps decision, will take longer than expected.

After the decision is issued, it will be reviewed by the Staff, which will submit it to Shore Protection Board for recommendation to the Town Council. The decision would need to be approved by the Council, at which time the staff would start the permit process with state and federal agencies; another timely process that will further delay the project timeline.

The Reach 8 sand project completion is estimated to be finalized in 2018-19 due to the town’s project regulations, limiting work to be performed in either late fall or early winter.

Reach 8 project is an extension from Lake Worth Municipal Beach to La Bonne Vie condominium located at the town’s city limits on the south end. They have long felt neglected.

Town of Palm Beach Loses Battle Against State Regarding Uber 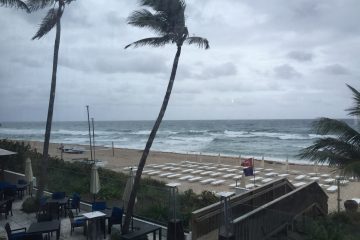 Sand Sources Were the Talk of the Shore Protection Board