Was the Recent Undergrounding Bond Referendum Vote Too Close to Count? Some residents of the Town of Palm Beach think so. In fact, one Palm Beacher, Arthur Goldmacher, believes that the reason the referendum results were so close is because of the misleading wording on the ballots; which might of led residents to believe that the home owners on the island would not be left with the lions share of the bill in the form of special property assessments.

Arthur Goldmacher claims that the bond referendum, in which only 62 extra votes were enough to approve $90 million in bonds to fund the town of Palm Beach’s undergrounding project last March,  is void since it’s misleading phrasing would have kept some residents from voting in favor of the bonds, and has therefore filed a lawsuit against the town last April.

The voting was so close, in fact, that even Town Clerk Susan Owens weighed in at the time to mention that there would not be a recount of the votes stating “the split between the two votes has to be half of one percent or less to trigger a recount” (the split was a little over at 1.4 percent).

The lawsuit itself states that the bond “as written misled the public since it… [gave] the appearance that the town’s full faith and credit and ad valorem taxing power would be the primary source of repayment”.

The Town of Palm Beach has since motioned to get Goldmacher’s lawsuit dismissed, which has been denied by Judge Catherine Brunson upon taking both sides’ arguments into consideration, which means that the case will indeed most likely be settled in court at a later date.

In the meantime, the island’s town manager Tom Bradford has stated that the undergrounding project will be funded from the town’s own operating budget as a sort of financial safety net, in the event that the lawsuit ends in favor of Mr. Goldmacher. 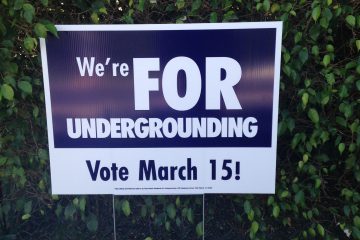