Mail destined for the affluent island town of Palm Beach carries the zip code 33480, including letters sent to President Donald Trump at his so called “winter White House” at Mar-a-Lago, as first reported by the Palm Beach Daily News.

But even with the President spending many weekends in Palm Beach, the island’s postal code is not as well known as Beverly Hills’ 90210, made famous by the teen-angst drama of the 1990s.

But as it turns out, fame isn’t everything. Money counts, too.

Palm Beach earned the No. 4 spot in the “Bloomberg 2019 Ultimate Zip Codes” report, moving down a space from No. 3 last year. The report uses IRS data to assign average adjusted gross incomes. Last year Palm Beach’s annual income was estimated to be $1.25 million, dropping to $1.07 in last week’s report.

Fisher Island pushed Miami Beach’s 33109 into the top spot once again, with an average annual income of $2.21 million.

The 216-acre Fisher Island “attracts international buyers from over 45 countries, according to Heinrich von Hanau, a lead developer on Fisher Island’s final two luxury condo developments. Over 700 families live on the island and many use it as a second, third or fourth home,” according to Bloomberg.com’s story about the ZIP code report.

Two California postal codes earned the second and third spots on the list. Atherton’s 94027 came in second with an average annual income of $1.29 million, and Palo Alto’s 94301 followed shortly with an income of $1.28 million.

Tribeca’s 10007 ZIP code located in downtown Manhattan came in fifth and marked the first time that a New York City postal code made the top five, according to Bloomberg. Tribeca’s average income was estimated at $879,000. 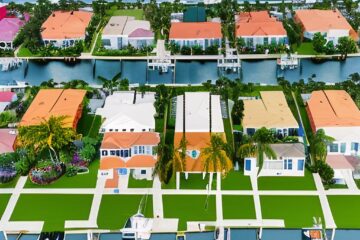