The Flagler Memorial Bridge is finally open, after being under construction since 2013. One lane is open in each direction, which is great news for people that are heading to the Town of Palm Beach, or heading back to the mainland. The bridge was not scheduled to open until 6am on Monday, but it actually was opened for traffic several hours before that, around 1pm Sunday afternoon.

The northernmost of the three bridges that connects Palm Beach and West Palm Beach first opened on July 1, 1938. The Flagler Memorial Bridge still stands, and is the oldest movable bridge over the Intracoastal Waterway from North Miami to Cape Canaveral.

Back in the beginning, during the 1890s and early 1900s, the bridge was no more than a wooden railroad trestle, a one-lane construction that provided access to Palm Beach. Mary Lily, the wife of Henry Flagler, complained about the bridge, the noise of the train and smoke so much that Henry Flagler eventually moved it away from Whitehall where they had their home. For a time, it was a toll bridge – the crossing price for pedestrians was a nickel, and a dime for horseback riders. But in 1938, the wood was replaced by a four-lane concrete and steel structure that cost $725,000.

It endured several pricey reconstructions and makeovers since. The latest reconstruction of Flagler Memorial Bridge cost the taxpayers about $105 million and lasted for three years. Now it is a four-lane divided bridge that includes two 12-foot wide travel lanes in each direction, an eight-foot wide shoulder on each side, a 15.5-foot median, and an eight-foot wide sidewalk on each side, with pedestrian traffic separated by permanent concrete barrier walls.

Business owners in Palm Beach are thrilled and relieved that the new bridge is open for traffic, as the old one used to get backed up during peak hours. With the holiday season coming up and snowbirds coming back to South Florida, the timing could not have been better. 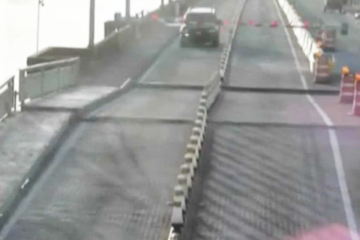