Future tenants at the Royal Poinciana Plaza are finally going forward with their plans.

The Landmarks Preservation Commission of Palm Beach heard about the Coyo Taco’s plans to utilize the recently revitalized courtyard just one day after the taco joint based in Miami got the permission to open in the plaza. Also discussed by the board were potential ways of shortening the process for the businesses that are looking to move into the plaza.

Coyo Taco requires a second door that would face the courtyard, and according to Alexandra Patterson who is the spokeswoman for plaza leaseholder Up Markets, food joints will help drive pedestrian traffic in the plaza. This second entrance would help with the restaurant’s grab-and-go-area, and they also plan to request outdoor seating.

The first request was approved by the members of the Landmarks Preservation Commission who stated that having a non-high-end place to eat on the island is beneficial for the community. According to Ted Cooney, the commission chairman, the assumption that people on the island only want high end is not always correct, and in the light of that, having a taco joint in the plaza is a great addition to the town.

The Town of Palm Beach Town Council did, however, receive some concerned comments from some residents who complained about the potential noise and the type of crowd Coyo Taco might attract, but these concerns have been dismissed by the landmarks commissioners after a long and heated discussion.

As the plaza is seeing an increase in leasing traction, Cooney pitched an idea to Patterson that would hopefully make the process easier for prospective tenants of the plaza, considering how the approval process could seem intimidating. Every tenant who desires to come into the plaza needs to get a certificate of appropriateness and ends up having to send legal notice to the neighbors.

In the future, new tenants have four preapproved storefront options to choose from, which would eliminate the need to go through the Town and make the process smoother. Commission members have agreed with this suggestion – Page Hufty, Patrick Segraves and Tim Gannon spoke in support of it, and the board approved the changes.

One more thing that was informally discussed was outdoor seating for Saint Ambroeus. Parking presented a complication. The restaurant cannot add tables, but they are allowed to move 20 tables from inside to the courtyard for outdoor dining. All the commissioners approved the idea, and it did not require a formal approval because no structural changes are necessary.

Coyo Taco’s door request and the storefront option will be discussed by the Town Council. 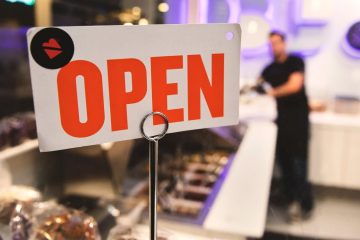